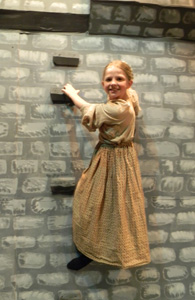 Magic of the Goat Children is a heart-warming musical comedy for young people. The show has 39 named cast members, and includes males and females, adults and children. It’s a show well suited for community theater, children’s theater, or middle or high-school aged school groups.

Synopsis:
Girl power is the theme of this charming fairy tale, in which the tiny walled kingdom of Beda comes under attack by Ubo Skald and his ruthless and comical band of outlaws. 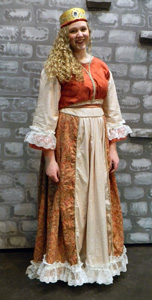 Young and inexperienced Princess Birgitta must somehow defeat this threat and save her kingdom, and convince her skeptical subjects that she is a capable leader.

Birgitta has help in the form of Luke and Lysander, her two besotted, and often indistinguishable, suitors. She also has her many, many high-spirited younger sisters who are more concerned with romance than battles, and the village busybodies, who rarely stop gossiping or knitting long enough to offer useful advice. And then there’s her Esteemed Council of Councilors, Ignatius, Octavius, and Engelbert, who can barely bring themselves to offer their (ahem) sagacious, scholarly, and perspicacious (clearly) advice to a… a… girl. (Gasp. Shudder.)

Watching the mischievous village children at play gives Birgitta the inspiration she needs, and she develops a clever plan to deceive her kingdom’s attackers.

Playing upon the superstitions of the outlaws, she infiltrates their camp in the disguise of an old hag, and spins a wild tale of magic. She convinces the outlaws that the kingdom is protected by a sorceress princess and can’t be defeated. Among other tricks, she dresses the children in heavily armored goat costumes to provide “proof” in the form of immortal goats, terrifying the outlaws, and saving her kingdom.

Based on the book Night of the Goat Children by J. Patrick Lewis, this story is loosely based on a real event in the Thirty Years’ War.

“Best thing to happen in West Bend in decades. Congratulations!! I whistled the songs on the drive home.”
~ Mark P

“The collaboration was magical–an enchanting, first-class production!”
~ Nancy B